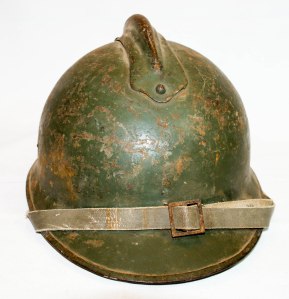 The M15 Adrian helmet was a combat helmet issued to the French Army during World War 1. It was the first standard helmet of the French Army and was designed when millions of French troops were engaged in trench warfare, and head wounds from the falling shrapnel generated by the new technique of indirect fire became a frequent cause of battlefield casualties. Introduced in 1915, it was the first modern steel helmet and it served as the basic helmet of many armies well into the 1930s. Initially issued to infantry soldiers, in modified form they were also issued to cavalry and tank crews. A subsequent version, the M26, was used during WW2