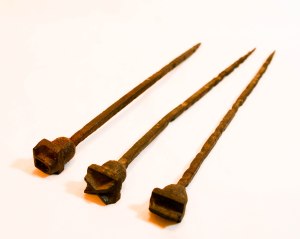 Three 18th Century original hand forged iron branding irons. This is so horrific and inhumane. The origin may be the ancient treatment of a slave (often legally not a person) as livestock. European, American and other colonial slavers branded millions of slaves during the period of trans-Atlantic enslavement. Sometimes there were several brandings, e.g. for the Portuguese crown and the (consecutive) private owner(s), an extra cross after baptism as well as by African slave catchers. To a slave owner it would be logical to mark such property just like cattle, more so since humans are more able to escape.